Editor's note:  Olen's coming to America on Thursday to meet his very pregnant wife (that's me!), so shouldn't need this Go Bag much longer.  My parents, Rollin and Dolores Bland, are returning to Chad tomorrow.  We're planning on returning in January, post baby and OB oral boards.
Posted by Life Under the Mango Trees at 2:59 AM 2 comments:

Yemen has been a Muslim no-man’s land filled with Al-Qaeda and Al-Qaeda rumors. There’s little to no political infrastructure. Little to no infrastructure period. But they have lots of sand. They have that going for them. That’s one plus. Probably about the only plus.

Syria is undergoing massive civil war with factions fighting over who can dominate what and whether it be secular or Muslim. People are fleeing by the millions, willing to risk drowning in Mediterranean to make it to Turkey or Greece, then to Macedonia where the government is providing trains to move the fugitives on to the next country. They continue to cross borders across eastern Europe illegally while authorities turn a blind eye, going by foot or bus or train or any other means to reach Budapest, Hungary and the EU, where they stall for ages, before finally being allowed on to Austria, Germany and a dozen other destinations. Super hot mess.

Burundi. Al-Qaeda straight up says they’re gonna blow up the US embassy. Crazy.

Tchad is now one of six countries from which the US State Department is recommending departure of all American citizens as soon as is feasible and is allowing non-essential embassy personnel and personnel families to repatriate.

We’re one of the six most dangerous countries to be an American in?

Well, we got the message Sabbath morning, September 12, directly from the State Department via the US embassy list serv.

It’s not as easy as saying, go where you’ll be the safest. If that were the case, we never would have come to Tchad in the first place. And you don’t spend five years of your life dedicated to building up an institution just to leave it at the drop of a hat. We have bled here. We have shed tears here. And goodness knows we have sweat here. This is our home. Our house is here. Our friends are here. Our dogs and cats are here (and the buried bunnies and hedgehogs and genet). The majority of our married life has been spent here. Our three (and soon to be four) kids don’t know any other home but this one. Our entire professional careers have been spent here after training. We’ve spent the last five years learning tropical medicine, learning the languages (I can say vomit in French, Arabic, Nancere, Ngambai, Maraba and Fulani and greetings in several more), learning the people, learning the culture. We’ve recruited my in-laws, my aunt and uncle, the McDowells, Zach and a load of other volunteers. We’ve probably seen 200 volunteers come through in the last five years.

And if we leave, what will let us know we can come back again? Once the State Department puts up a warning, it usually doesn’t come down for a while. Years.

If we leave, where do we go?

This is not nearly as easy a decision as it seems on the surface.

Understandably, the evacuation insurance company wanted to get us out sooner rather than later. If things head south, evacuation gets pricy.

Understandably, our church wanted to get us out sooner rather than later. Worst-case scenarios probably flying through their heads, the last thing they need is a missionary killed or kidnapped.

We negotiated with the church and arrived at a compromise. I would stay in Bere. James would go to Moundou. The other twenty would leave. Including Danae and the kids. We packed as we always do. Empty suitcases headed to America with plans to fill them and return to Tchad full.

So September 15, poor little old me was left alone waving goodbye to my in-laws, my volunteers, my 32-week-plus pregnant wife and my 3.8 children. I was understandably depressed for the first few days. I still don’t like it, but I’ve realized how much more efficient and productive a human being can be when there aren’t kids aged 6, 4 and 2 running around. Not a trade I’d make voluntarily, but at least there’s some upside.

But the McDowell four will never return. It’s highly unlikely any of our four student missionaries will return. At least one volunteer won’t be returning to Moundou.

I’ve contacted a Brazilian pediatrician, an American surgeon, a Ukrainian surgeon, and American FP and his friend, a Brazilian GP, a nurse with her BSN, a contractor team, and electrician team, an accountant and others. I’ve told them to hold off on their plans to come. This hurts. This sets us back. Way back.

So there you have it. We’re trying to make the best of the situation. Danae is driving to Virginia tomorrow and will enroll Lyol in school, a couple weeks late.

The church will meet this week to decide our fate. If there’s no change, can our regulars return in a couple weeks? The Blands, Zach, the Gardners? These are people critical to our success.

Or if there’s no change, does that mean people still need to stay away until embassy staff are called back and the recommendation to evacuate is lifted?

If that’s the case, like I said, how long do we wait? Honestly, we’ve poured so much of ourselves into this mission, I don’t think we could start over again someplace else. It would take too much out of us. It’s certainly not a job you can do halfway.

But we don’t feel ready to quit. Surely this isn’t how God planned our stay here to end. It’s just not possible. While we’re not ready to move on to another mission field, we’re also not ready to move back to America, buy an SUV, shop at Trader Joe’s and take our kids to soccer practice while living the upper-middle class suburban picket fence dream. Not that there’s anything wrong with that. But it’s just not us. From here to there? No. Can’t be.

And get a job? I love emergency medicine. Everything about it. But who’s going to take me at the drop of a hat with no American experience in over five years? I’d need to find a job, get licensed, get hospital privileges. That would take a minimum of three months, usually more. Do I start looking now?

So everything is in the balance.

For the moment, I’m sitting tight in Bere, alone. Wondering how long I dare delay before going to America to my pregnant wife. Can I wait until 37 weeks? 38? 39? If I leave before somebody comes back and there’s no longer a presence, will it be harder to come back later? Will I ever get to come back?

Why not leave? We spent five years of our prime as the dumb idiots here while God tripled our income, doubled our patients, tripled our square footage, laid the foundation for a nursing school, fenced in the hospital, trained anesthesiologists (thanks, Mase), started branch Sabbath Schools, among other things. And if we leave, what happens? Odei is a kind doctor. Samedi is a natural surgeon. Antoine is an honest administrator. Ndilbe runs an operating room like no other. Jonathan and Sabine get it on pediatrics. Baikao gets it on maternity. Bernard understands post-op wards. Dainone is one of the smartest people I’ve ever met. We’ve trained people the best we can.

Medically, the quality of care wouldn’t drop too much. Danae can definitely do things no nurse can. Rollin can do surgeries nobody else has business even looking at. But we’d still be above-average. We would no longer be known as the hospital with the foreign doctors and our patient census would drop significantly. We would need to lay off staff. We would need to shut off the generator at night.

And there are vultures. They came the same day they saw twenty Americans leave town. Fortunately, they see me still here and they leave. But the moment I leave, it will be over. People with unkind and selfish ambition would be here to take what they could. And it’s not as easy for somebody to say no in this culture as you might think.

So yeah, I provide a little medical advice. The day before flying out, Danae spent over $6000 on an ultrasound machine and sent it to me. I can do that when Doudje is gone. I can do rounds. No biggie. I can do procedures. I can do consults. And I provide my typical limited administrative guidance. Do this. Don’t do this. But mostly, I’m here as deterrent. A big billboard that there is not yet any carrion here for you to be picking the scraps off of.

In terms of the danger, the security notice stated there are no specific threats. And legally, the embassy cannot allow their personnel to leave based on information that isn’t public. And legally, if there’s information that puts my life in danger, they are required to inform me. There are rumors the president’s health is flagging, but he was supposedly out and about during the Muslim holiday Tabaski last Thursday. There are rumors Libya is mounting a force in the desert mountains to the north. Or take your pick of rebel rumors. Take your pick of Boko Haram rumors. The rains came in late this year, but they came. There was worry of drought and famine, but it would seem we now have enough rain. The global price drop in gas means it’s no longer profitable for foreign companies to come in and export oil. So the government is no longer making any money. And they are fighting a very expensive war against Boko Haram. And they are telling government employees they will need to take pay cuts, which has never been an acceptable statement in the history of francophone culture. So there is set-up for badness. But there really isn’t anything concrete. The missionaries from other denominations are not leaving. The other embassies aren’t issues evacuation warnings.

James and I still feel perfectly safe. Nothing seems different from a few months ago. I spoke with the governor and with the Minister of Security. They said all was well. All our local authorities know what’s going on and nobody can figure out why the State Department put out their warning. The rumor is the embassy families had such restricted movements in the capital that they requested permission to leave. And when the State Department granted permission, they threw in a line about recommending all Americans leave, a statement they can’t quickly go back on and a statement the embassy seems frankly embarrassed about.

So I stay. We have a trigger word. I have a computer bag packed to throw over my bag and walk out the door at any time with five seconds’ notice (unless I have to rinse the shampoo out of my hair). I have all vehicles and motorcycles full of fuel. I know the way to the N’Djamena airport, the Moundou airport, the dirt strip and Cameroon. Honestly, safest route is probably to stay put. And by far the most likely thing is nothing happens.

But if it does, I will leave.

We are walking away from our identities.

We are walking away from our lives.

With nothing but our family and the suitcase of clothes Danae took back to America.

I know you’re well-intentioned. But don’t judge me. That’s not what I need to hear right now. 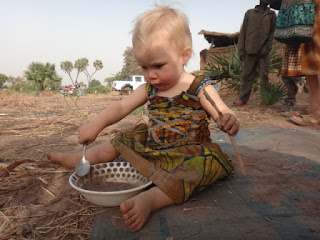 Posted by Life Under the Mango Trees at 6:59 PM 9 comments: