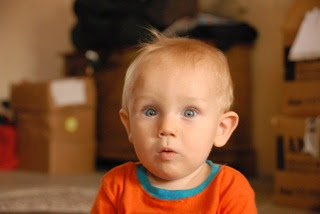 We always said we would give IV quinine if Zane ever got malaria at a young age. Then Adam died and things became a little more real.

We don’t want advice. We don’t want judgement for bringing our kids here. We’ve seen enough of that passed on the Appels to last all of us.

Malaria is a real disease. It’s just that half the world doesn’t care about it. Not on purpose really. Most people just don’t know that it’s one of the leading killers in the world. And people here are too impoverished to have a voice in the places where pharmaceutical companies exist. I guarantee that if something like malaria existed in first world countries, it would be eliminated by now. There would be a vaccine. There would be better medicines.

But for now we weigh the options. And we ask for your prayers to help him recover.

We are so thankful that Zane made it to 8 months of age before getting malaria. He’s almost 9 months now. A month ago he got his first tooth, “All the better to bite you with, Mommy!” With the tooth came a fever.

But then the fever persisted. We didn’t just do nothing about it. I did three home tests and two smears in the hospital that were all negative. The fevers were on and off, just like malaria. After a week, we decided to just treat him.

Instead of IV quinine like we always said we would do, we gave him artemether injections. Seven days of injections is tough for a little guy, but the side effects are less risky. We gave fansidar and malarone with it. We even added Bactrim for good measure and amoxicillin for typhoid fever, just in case. He was a walking (well, crawling) pharmacy.

He got better. Then no fever for a week, yay! He was better.

Then they started again. 102. Okay, we’ll do mefloquine. A one time pill. It’s got no reaction with primaquine, so we added that too. Five days later and he has a fever of 103.

It’s hard to be your own kid’s doctor when you helped care for your friend’s child dying of the same sickness. You just can’t be objective.

If Zane came into our ER we would have started him on IV quinine long ago. But then people here don’t have other options. There are no other medicines here. No one has malarone, mefloquine, primaquine; and artemether is way too expensive for people here (not to mention not effective).

Today there was no choice. Nothing else is working. He’s going to take the quinine pills.

Did I mention they are the world’s most bitter-tasting thing ever? Yeah, they are very, very bitter. We even used a quinine pill for one of our food challenges during the SM survivor game. Just a speck of it will make your mouth turn funny shapes for at least an hour. Or vomit.

I crushed up 1/4 of a pill and put it with 1cc of water, slurped it up with a syringe, and stuck it down the back of his mouth.

Meanwhile Zane is playing happily and doing quite well. Just pray that he continues to do well.

Your Tylenol suppositories have melted in the heat.

You will notice on our blog, missionarydoctors.blogspot.com, that we have a link for donations. This is through Adventist Health International’s website. We believe strongly in the mission of AHI. We feel that AHI is an organization worth supporting. By donating through AHI, you can be reassured that there is a strong measure of accountability following your donation. Just mark the donation for ‘Bere.’ And remember that your gift is 100% tax-deductible.