I know the story. The little donkey caries the Savior of the world.

But my leg hurts so bad.

Man I wish I wouldn’t have made that snarky remark to Uncle. He bit me. I mean I’ve been bad, but did I deserve this?

All donkeys wish to be like that story of old, carrying Mama Jesus. Or carrying King Jesus. With this hurt leg and all...

I would never even have the chance to be in a Christmas program. A few years ago some humans organized a Christmas play in Bere. That pregnant donkey delivered her BABY donkey DURING the play! Talk about a star! How am I supposed to do something memorable when I’m so lame?
I don’t even feel like walking on my hurt leg! Just a limp. Clip.

I’m getting a little woozy. I think I’ll lay down.

Wait, what is this? A big crowd? It must be those nasaras again. They are a pretty fun group, bringing songs and laughter to the village. Telling stories about the great donkey who carried mama Jesus.
I’m confused, they just came here yesterday. I was nuzzling up to the little one they call Addison. I just had no energy to run away. Stinking leg. They did say they were coming back with help.
There’s a few more of them today. The ones they call Andrew and Olen gave me a shot! Ouch! It hurt, but not as bad as my leg. I just have no energy to move. I can’t walk. I can’t move. What am I good for?

Wait! What is this again? Andrew has picked me up! He’s carrying ME! In most stories of old with humans, it’s the DONKEY that’s supposed to carry the human! This human is carrying me! He said he wanted to bring me near the well to wash off my leg that was bitten.

I’m supposed to be the helper, but he is helping me. He must be a surgeon because he took one look at my abscess and cut it open. Right then and there!

The other nasaras said they needed a surgeon to help them with their work. Could this be him or her? My mama said it must be true because she read his shirt, “Bere or Bust.” Or maybe that means he was going to bust me up in Bere. I don’t know. But I somehow ended up in Bere, at the house of Olen. Andrew is not really busting me up yet, just changing my dressings where Uncle bit me. Now the woman is doing them.

I’m getting better. I can actually walk on all four legs now. It’s been two weeks living and learning about the nasaras.

But where is Andrew? I sure hope he comes back to help my humans when they need cut open too.

I think of the stories of old. Of the donkey who carried mama Jesus that starry night on the way to Bethlehem. Jesus came to help our world. And now I can be a helper too because I am no longer sick. Now maybe I can be in the Christmas program to help people know about Jesus’ birth. Now I can carry sick people to the hospital. Now I can......

Ps. Little Donkey has fully recovered. He plans to be in a nativity program that we are having mid January this year for our Happy New Year/we couldn’t do it earlier program. Stay tuned!!
We love the animals in Bere too!!

Pss. Drs Andrew and Megan were here visiting Béré for the first 2 weeks of December. We love and welcome visitors. Shoot us an email and ask how you can be helpful too! And pray for them and others who are planning on serving long term in the mission field.  Getting there is sometimes the hardest part. 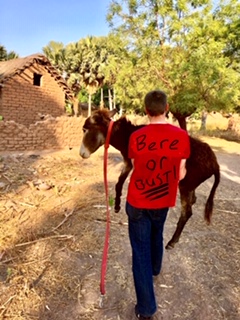 Posted by Life Under the Mango Trees at 3:36 PM 1 comment:

One day we went to the river where we love to go swimming. When we got there I jumped out of the car and ran around the river with my brother. My Dad went a litter farther down stream. I had just stuck my foot in the water when my Dad said to my Mom, “Get the kids in the car!”
We all ran into the car. I saw little waves that got bigger and bigger. Then the hippo came up and was about 30 feet away from us. After it passed us I got out of the car and went to my Dad and Mom. My Dad showed me where he had seen the hippo before this. It had gone about 300 yards in 2 minutes.
My mom did not want to go swimming any more. My brother did not want to get out of the car. Zane did not let Addison get out of the car. Juniper was just relaxing in the back of the car.
So we had a looooong drive in the car instead of swimming that day.

Posted by Life Under the Mango Trees at 3:06 PM 3 comments:

During the first two weeks of the Smile Train team, we did three huge head tumor cases (along with many other head and neck masses, but not the HUGE ones like these). Two were big mandible tumors. Not little ones. BIG ones. They ended up with plates in place of a large portion of their mandibles that needed to be removed due to their tumors. Another was a man with a huge 3 kg bony tumor growing off of the side of his head.
None of this would have been possible without our amazing anesthesia team. And of course our visiting surgeon.
When you see one life changed from such an impossible surgery, you have to wonder who else is out there who hasn’t come in for a consultation. Olen and I were both in the OR when I wondered out loud, “Isn’t there a guy here in Bere with a big mass like this?”
Olen replies, “Ya, that guy in the market...Market Guy.”
We go on to explain that we have seen someone with a larger-than-life tumor on his face. It was so large that it has turned his mouth sideways. We go on to explain about Market Guy, and wouldn’t that be cool if we could find him?
Bill is only here for a limited time, but... he did decide to extend his stay by a week. And we will have an anesthesiologist here next week. I asked some of the nurses and they seemed to think that he still lives here in Bere.
I ask my guards the next day if there is someone in Bere fitting this description.
The next day, who shows up but Market Guy. Now market guy has a name, but we didn’t know his name before, so we called him that for short.
The tumor started to grow on Christophe’s face when he was ten years old. And for the past TWENTY years, it has continued to slowly grow. Disfiguring his face more and more. It was a large maxillary bony tumor, an amelioblastoma.
Christophe is a very open and likable guy. He’s not shy about his looks. He doesn’t cover up or hide. But this tumor has had a toll on him. He told me he wasn’t married because no girl would want to marry him. Not because of his looks only. But because they didn’t want to become a widow. The whole town knew that eventually the tumor would grow so big that it would kill him. And nobody wanted to become a widow knowingly. Nobody would let him marry their daughter. No one would give him a real job because everyone just gawked at him. No one took him seriously.
Several years before, he had a church family. He went to church. He believed in God. His church family saved up a bunch of money to send him to some specialists in NDJ. Everyone that he saw told him it was impossible. His tumor cold not be removed.
So he drowned his sorrows in alcohol. He didn’t drink a lot because he didn’t have a lot of money, but he drank as much as he could afford. The locals later told me that Christophe was the one in the market who could be found picking a fight (probably because he was drunk). He didn’t care. He quit going to church. His life was over already. He was doomed to die.
Until he wasn’t.

That’s when the Smile Train team take two came along. Dr. Bill and Dr. Geech. Bill only had three more days left, so we reserved a whole day for Christophe’s case. We went in at 5am to prepare him. Get his IV, get him shaved and washed, etc. Jonathan did his amazing anesthesia (actually managed straight direct laryngoscopy). Bill did his wonders as God has blessed him to do.
No one could believe it! Everyone and their donkey stopped by to see the guy from the market who was said to be inoperable.
Now he has a second chance at life. Now he can get a real job. Now he can get a wife.
Christophe now wears a mask out and about. His mouth is still turned sideways because of the effect of the tumor growing for years, though he doesn’t have the tumor anymore. Prior to this surgery a mask would not in any way cover up his tumor. Bill plans to do more reconstruction on his face next year when he comes back.
Christophe went to church last week all dressed up in an old shirt of Olen’s. I don’t think that going to church alone can save a person’s soul, but now Christophe is searching for something to fill the void of emptiness that has filled his life for so many years. Please keep him in your prayers. I know Satan is unhappy about this change in Christophe’s life, but God is stronger and does the impossible so frequently.

Posted by Life Under the Mango Trees at 3:03 PM 1 comment:

Of course, nothing here is without challenges and complications. At some point during the three weeks of cleft lips and cleft palates and insane tumor resections and flaps and... our dermatome went for a swim. And dermatomes are not meant to swim. (A dermatome is a machine, ours is run on compressed gas, that vibrates a blade to take a thin slice of skin from one place in the body and put it onto another place that needs skin. The host site loses such a thin layer, that it heals quite quickly with minimal intervention. Without a dermatome, one must take a ‘full-thickness’ skin graft from a donor site, which means the original host site needs extra work to heal, and the graft itself is a much more painful process for both surgeon and patient, not to mention drastically more time-consuming.) Some exceedingly helpful and overworked nurse in the operating room was trying to do a great job and clean our instruments really well... and didn’t speak English... so didn’t read the ‘Do Not Submerge’ warning on the dermatome. So bleach water got into all manner of places where it shouldn’t have. And now we don’t have a working dermatome, which is a losing situation for Danae, who now has to spend copious time carefully removing full-thickness grafts and then treating the place she took the graft from, and a losing situation for the patient, who now has to heal up where they lost a thick hunk of skin.
So... if anybody has a spare dermatome lying around and collecting dust...
Posted by Life Under the Mango Trees at 12:13 AM 6 comments: